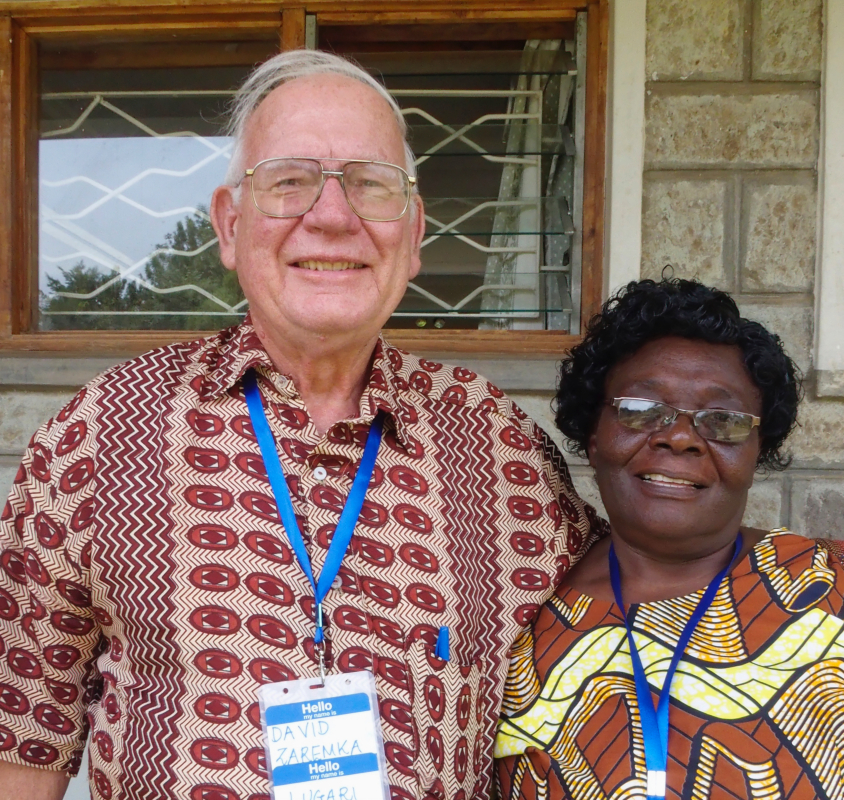 Many members of the Friends United Meeting community in both Africa and North America have been moved by the recent deaths of David Zarembka, on April 1, and his wife Gladys Kamonya, on March 25. David and Gladys were well-known for their peace work in East Africa, and for their work for Friends, which brought them into partnership with FUM in various ways.David worked closely with FUM as an FCPT leader, as a member of the Kaimosi Hospital board, and as an FUM General Board member and triennial representative.

David’s work with Friends Church Peace Team began with its formation and has continued to the present. Once donor funds given during the post-election violence were exhausted, FUM raised money for FCPT Coordinator Getry Agizah’s salary and the FCPT committee administrative costs, and David raised the money for the programmatic activities. He worked through the Africa Great Lakes Initiative, and then when he left AGLI, he worked through Transforming Communities for Social Change, a Kenyan community-based organization founded by David, Gladys, Getry, Peter Serete, and others.

In addition to the many remembrances that can be found online, FUM staff and representatives who worked closely with David have shared these memories with us:

‍As we lay David to rest today, who has remained a faithful companion to Gladys even in death, we the family of FUM Africa celebrate them for their inspiring faith. That they leveraged their cultural diversity into a formidable strength to bless Quakers and peoples of Africa is a great light for us. They traversed East and Central Africa with their beautiful feet to bring the message of peace and love not to mention the many gifts they brought with them wherever they went. They lived for us. What a great missionary couple for the people of Africa. Let us therefore make haste to pursue peace and reconciliation that their ministry may live and manifest among us in their memory. May God rest their souls in eternal peace.

‍My first contact with David was when I was still working in the Central Bank of Kenya, and we had gone to the airport to meet him. As we waited for him at the arrival terminal with a placard raised facing the people arriving from the flight, he was on board. We were all expecting to see a black man from South Africa. This was because the name “Zarembka” sounded to us African, and mostly south African. As we waited to meet this African, we saw a white Caucasian bald man approaching us, saying, “Hello, I know you are looking for a black man. I am David Zarembka.” We all blasted into laughter as we hugged each other with joy and surprise that he was not what we expected. At this time, we were only doing the hospitality of welcoming and sending him to his scheduled business with peacemakers in the country.

I started working with David in his full action of peacemaking when I joined the FUM Africa Ministries, especially during the 2007–08 post-election violence in Kenya, when David was in charge of the counseling and healing of the victims affected by the violence. In his true peacemaking action, I saw David where he did not fear going to the frontline of the violence in the North-Rift area that was a hot spot of violence. David trained a team that handled the healing and reconciliation process. David trained many Kenyans on managing the crisis, especially as we tried to resettle the victims who had been kicked out of their homes.

Before the post-election violence, David was appointed to be a member of the Hospital Board of Friends Mission Hospital Kaimosi, under FUM management since 2006. David loaned us $20,000 interest-free to help a financially-strapped hospital that was in bad shape. These funds helped provide a facelift for the hospital, that improved the hospital from leakages when it rained. He was a generous man.

I had heard and witnessed many testimonies from Rwanda and Burundi—cases where he worked with David Niyonzima and many other peacemakers to help the country manage trauma after the genocide of 1994. David was just a die-heart of the Africans and loved seeing peace prevail in the communities of East African countries along the Great Lakes Region. Great Lakes included countries bordering Lake Victoria, Lake Tanganyika, and Lake Kivu.

David has raised many young men and women in peacemaking. He believed in raising people who could stand for peace and justice. David was a man who believed in doing his work with a very high level of integrity.

David had his operations principles, which sometimes crossed with some people but did not deter him from his course. We would differ with him on opinions for some things, but we would still work together peacefully. I admire his resiliency in working without listening to negative things people said about him. He was determined to do what he saw was the best way to do things. He was the only American peace missionary who committed his life to see the African remain peaceful, and he respected its cultures.

He often defended Africa from biased Western perception, especially when he wrote in the “Western” Friends Journal, correcting the attitude of many foreign writers who have not been to Africa writing wrong things about Africans. His decision to stay in Kenya with Gladys and settle on the farm in the remote village of Lugari Sub-County at Lumakanda shows his love, humility, and respect for the Africans.

David has been a solid mentor for Getry Agizah, the coordinator of FCPT (Friends Church Peace Team) created after the post-election violence of 2007–8 in Kenya. He has also been a strong mentor and built Peter Serete into a strong peacemaker in Eastern Africa. Furthermore, many other men and women are doing peace work in Kenya, Rwanda, and Burundi. We shall indeed miss David and his humor in our FUM board meetings, where he and Gladys always came together to attend. He remained a strong pillar of FCPT and saw that it fulfilled its peace work in Kenya. We shall surely miss this great man of peace in our midst. Blessed are the peacemakers, for they shall be called the children of God.

May the Lord rest his soul in eternal peace.

‍A great deal can be said, and I'm sure will be said, about David's remarkable contribution to African Quaker peacebuilding. What I would like to point out, because I think it has not been well-enough appreciated, is that David consistently and rigorously sought to bridge what we might call “the dignity divide.” He challenged beliefs and practices in Quaker and peacebuilding organizations in which people from donor countries and people from recipient countries are treated with very different standards and assumptions. The best-known example of David's insistence on dignity for recipient communities has to do with the common practice of paying a “sitting fee” to participants who attend a program, workshop, seminar, conference, or committee meeting. It is commonly believed, among charitable organizations, that Africans will not participate in programs “for their own good” unless they are paid to do so. David vehemently refuted this presumption, and insisted that any program with which he was associated would not engage in this practice. He would be told repeatedly that “everyone knows” that Africans won't come unless you pay them. He would point out, again and again and again, that the data says otherwise, and that this practice robbed Africans of their dignity and compromised the goals of the program.

David was a strict administrator, and when he said transport reimbursement, it was strictly transport reimbursement. In some instances he could come with his track to a workshop or a meeting, and at the end he would offer a ride to people who were going in the same direction with him, but on arrival he would instruct that they be reimbursed for transport for only one way—which was contrary to the thinking of many facilitators as they knew this was a lift or a free ride and they could save the fare refund.

David introduced the concept of homestay to avoid the great expense incurred in hotels. Ideally, the host where the training was being done could host the local facilitators for more bonding and reduced cost. But inasmuch as this was a good idea, a team of Nigerian facilitators did not like this, and went the wrong side with David who was adamant on their request for big hotels.

Talk of publication, networking, and collaboration, and this was David—who liked working with any individual, organization, or institution of like mind. David could inform the entire world of any small success achieved in peace work and any other happenings taking place in and around Africa. David did not mind the fluency of English in writing a report, but would tell everyone to write anything notable in the workshop.

David believed in integrity in the use of funds and condemned misuse of funds in the strongest terms possible. This made him also create some enemies who thought they had found a “mzungu” with lots of money. But to those who spend money prudently, he was a mentor, father, guardian and an advisor.

Despite his race, David could mingle with everyone: the old, children, Christian, non-Christian—in short, David was tribeless, and that’s why he was usually called “mzungu mwafrika.” He was a darling to many, with his nice swahili accent of English. He liked being updated and informed of current news, and every time I saw David he had a newspaper with him.

What amazed most people was his ability to literally know the prices of every commodity, and hence you could not deceive him.

A defender of everyone, he did not allow the weak to be humiliated by those in power, and he could stand his feet on behalf of the weak.

One big lesson David has taught people was his love to his wife. You could rarely find David alone, ever—they were always two. There were times in life that Mzee David would be harsh and annoyed over an issue, and all of us scared of him. Gladys, as a great companion, would try to cool things down and tell us when it’s the right time or not to approach Dave. They both blended so well that even in death, I think they make a perfect match.

Dave was a networking person. He made contacts in the USA and sent many Africans for speaking tours in various parts of the USA. His fundraising skills and always on the computer meant he really adored peace work and wanted to give more of him to the service.

David was quick to ask Americans to come to Kenya for a joint work camp. The issue was not necessarily to work, but it was building relationships among people from different cultures and backgrounds.

He might have crossed with so many people from both the USA and Africa because of his ideologies, but he really did have a heart of gold, and believed in small people to grow up and be counted.

Dave and Gladys spent much time to attend to conferences and board meetings, including Quaker Peace Network and FUM. They would come and be present, listen, and go back home. He, indeed, was holding the spirit of Missionary in Africa. He was interested in progress. Seeing things moving, he was passionate about peace work, and all round peace work.