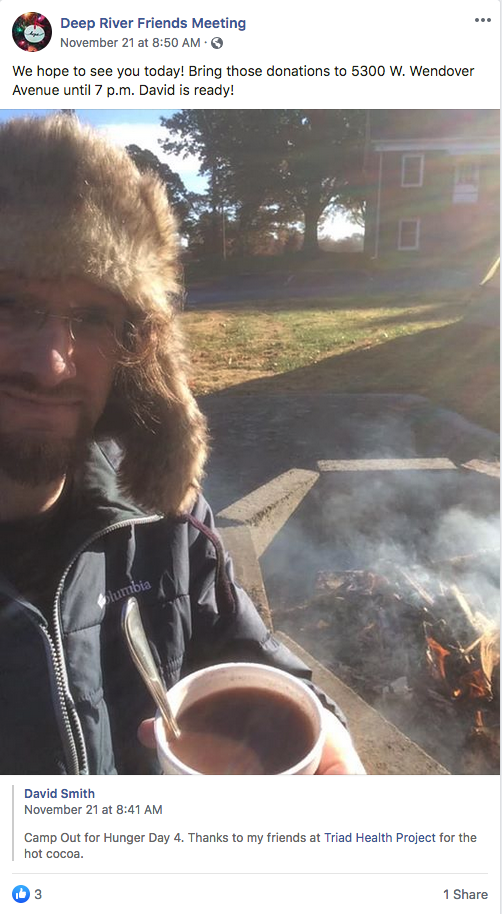 Three years ago David Smith felt a concern for the food insecurity and hunger problem in High Point, North Carolina. Although a growing community of over 100,000 people, in the last few years the city of High Point and Guilford County have ranked high in hunger and food insecurity. David wanted to make a dent in this problem and so he listened to the concern God put on his heart and followed his leading to organize a food drive.

Using a similar model David was familiar with back in his home state of Pennsylvania, he decided to camp out for a whole week in November and announce to the community that folks could bring food to Deep River Friends between 7AM and 7PM each day. Each night David camped out on the meetinghouse grounds and each day he and other volunteers would receive donations from folks. The first year the donations totaled right at 7,600 pounds. The second year the donations of food totaled 10,000 pounds. This year, the Camp Out for Hunger reached a new record and received in a total of 14,000 pounds of food donated! This was due to the wonderful generosity of folks in the community as well as partnerships with local schools and businesses who allowed the Camp Out for Hunger Food Drive to place collection bins in their locales. The donated food items were then distributed to food shelters around the community just in time for the Thanksgiving season and the onset of cold weather.

This truly has been a major undertaking but it has produced tremendous fruit in just three years. During those three years, partnerships and relationships have been formed with other agencies within the community of High Point. This has served to create awareness and collaboration between these agencies and multiplied their effectiveness within the community. The key, though, to all of this has been David’s willingness to listen and sit with the concern God put on his heart. As a Quaker, David believes God speaks directly to each person and gives us all a sense of purpose. It was through God’s prompting of his heart that he brought the concern to his faith community, Deep River Friends Meeting. In faith, Deep River Friends encouraged and released David to be faithful to this leading. No one had any idea where it would lead or whether

or not it would be successful. The last three years, though, have proven to be very fruitful and confirmation that God has been in this from the very beginning.

Another important component to this adventure has been the support and encouragement of David’s faith community, Deep River Friends Meeting. Through it all they have embraced it as well as celebrated it’s fruitfulness. Folks from the meeting have volunteered as well as donating food and funds. Most of all, the meeting has embraced the truth that our faith is at its best when it is acted on in service and love towards others. One of the sayings around Deep River Friends Meeting is “Making God’s Love Real” and the Camp Out for Hunger Food Drive is a significant way in which the meetings endeavors to make God’s love real within the community.

Ultimately, the fruitfulness of the Camp Out for Hunger Food Drive gives witness to what can happen when one person opens their heart to God’s leading and acts on the concern given to them by God. When this person is encouraged and supported by their faith community, there is an energy that begins to engage everyone and the whole faith community embraces the hard work necessary to get the job done. We are reminded that we already possess everything we need in order to follow God faithfully. All we need is a listening soul, courageous heart, and a faith community willing to take a risk and allow God to act. When this happens, God “…is able to do far beyond all that we could ask or imagine by his power at work within us.” (Ephesians 3:20, CEB) And, if this is true, we’ll certainly go past 20,000 pounds of donated food next year! We can’t wait to get started.