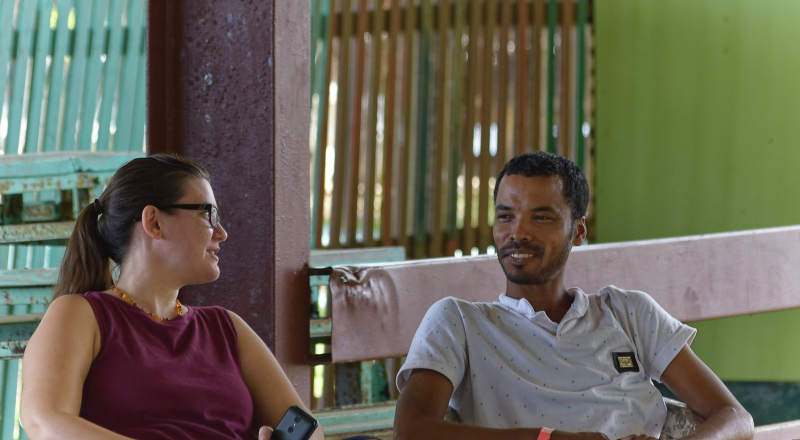 FUM's two Belizean pastors-in-training—Clifton Major and Christopher Luben—joined us about four years ago. I was introduced to Clifton by his wife, Athina Major, who taught at Belize Friends School. I had asked Athina for help with organizing a basketball tournament, as part of the Belize Friends Center’s campaign against human trafficking. When Clifton heard about it, he offered to help. I later learned that he was a community organizer who worked with youth groups in the community.

Since then, he has helped with organizing other community events when we conduct projects like the human trafficking campaign or peace building. When Clifton first visited Belize Friends Church, he told Judy Lumb, our presiding clerk, that the Meeting resonated with his spiritual experience, because there is room in Friends worship for people to speak directly with God and not through priests.

Since that first visit, Clifton has continued attending services and volunteering at our community center. He started learning about the Friends church, and later told us about his calling to be a pastor. Clifton felt a calling to be a pastor—but not a priest. He wondered whether one could be a pastor without being a priest. When he started attending Belize Friends Church and interacting with the tradition of Friends, he learned that God had called him to this community to serve as a pastor. Clifton is a police officer whose spiritual journey is towards becoming a full-time pastor among Friends.

We came to know about Christopher Luben when Belize Friends Church was starting. He had been living in California, where he was a member of a Friends Meeting there, and he was returning home to Belize. The presiding clerk of his Meeting contacted FUM asking whether there was a Friends Meeting in Belize, and whether the Meeting would receive Christopher when he returned.

Christopher Luben, right, hands out flyers during the anti-human-trafficking campaign.

Christopher is our Friends Center warden. He spends some of his time in the community doing outreach, inviting people to come to Christ and consider attending Belize Friends Church.

Before entering coursework at Friends Theological College, in Kaimosi, Kenya, both Clifton and Christopher went through a ministry discernment process guided by then-Global Ministries Director Eden Grace and FUM General Secretary Kelly Kellum, followed by a year of a hands-on ministry formation course that Nikki Holland and I taught here in Belize. While we were looking for possibilities for providing advanced training for them, the Wayne Carter family and USFW-International provided grants to support their training. Dr. Robert Wafula, principal at Friends Theological College, offered to provide training for them online. FTC will give them professional and academic training while they continue to serve at Belize Friends Church. We have already seen the fruits of their ministry in our church, at Belize Friends School and Center. We are looking forward to supporting their training to completion. We are blessed to have them as the first Belizean pastors, whom Friends will work with to grow the Friends church and ministry here in Belize.

We were able to enroll the Belizean students in course work at FTC based on our successful experimentation with online learning during the pandemic, and our continuing extensive use of an online learning platform. Christopher Luben was enrolled in the Diploma program, and Clifton Major enrolled in the Degree program, through Moodle, which is our virtual learning management system. Before they enrolled, they were given an introduction on how to navigate the Learner Management System. The LMS is an integration of learning content, learners, and educators. Through this platform, the participants are able to access content upon logging in with usernames and passwords. To make learning more participatory, Moodle includes a component which allows the lecturer to engage students in a virtual classroom. Upon joining the class, participants are able to see each other, as in a real-time, physical class. Assignments, exams, and other activities are done in a specified time frame. Virtual students at FTC are enrolled on Moodle to do three courses per module. In a year, we have three modules of study.