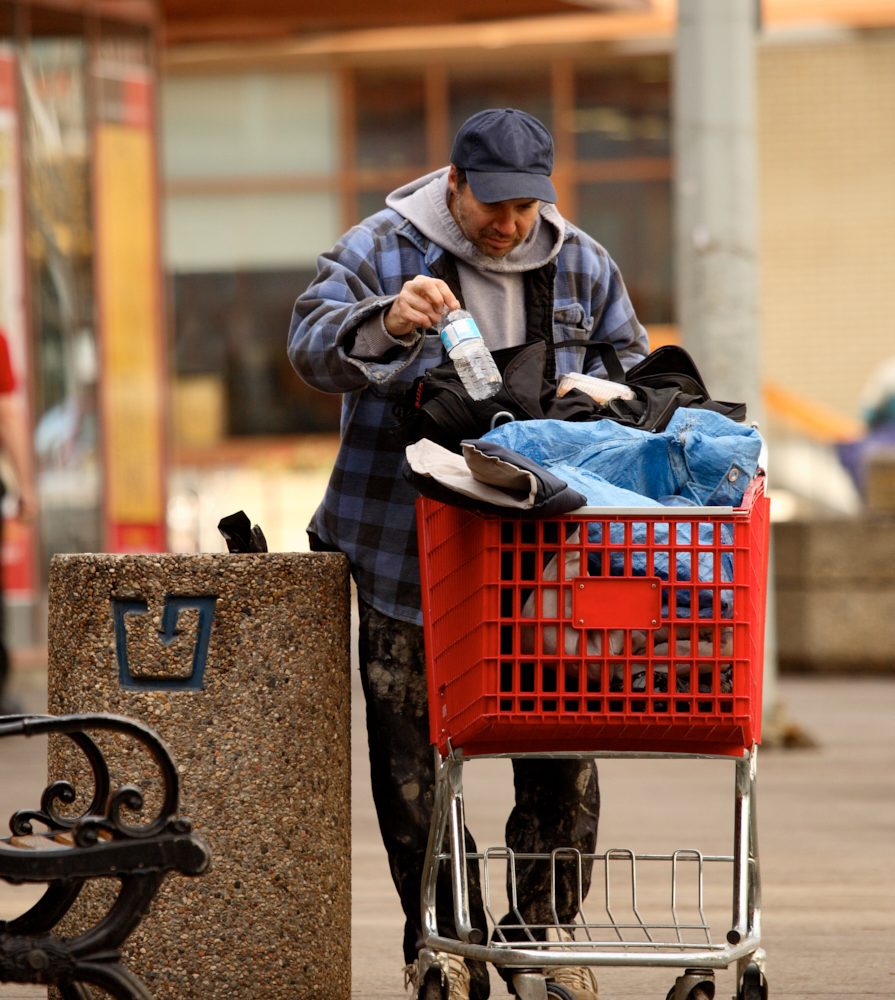 When Kevin’s mother called me to tell me he had run away from home, she was crying. Anger, fear, and exhaustion poured out of her through the phone. She wept as she explained how her son told her he would rather live on the streets of Portland, Oregon, than stay one more day with her and his younger brother. He didn’t need them or want them—and at fifteen years old, he was perfectly able to fend for himself.

The mom, in my view, had done her best trying to raise two very challenging boys in an impoverished neighborhood, with little help from family, no church to surround her, and rapidly diminishing emotional reserves. On the morning of our call, she was at the end of her rope, ready to give up. Except she couldn’t. Her son—her son—was missing. “Please,” she said, “will you find him and bring him home to me?”

I met Kevin working in a ministry focused on “troubled teens.” These were kids in prison, group homes, treatment centers, and among the 500+ homeless youth living in Portland in the 1980s. Kevin and I connected while he was in a detention hall, arrested for prostitution, trying to earn cash to feed his growing drug use. During his incarceration, we talked about the challenges he faced at home, at school, his hopes for the future and how or if the God he wished for was true. We continued to meet after his release, and I met his mother when I dropped by the house to visit.

In 1985, Portland was a city of 500,000 people with a metropolitan area three times larger. Finding one person among this population seemed a bit of a challenge. But inwardly I felt assured—I knew in that moment—that I would be led to find him. God had and would do crazier things in my life and so I told her, “I will find him and bring him home.”

In my office, there was a poster of an old, homeless drunk passed out on a street corner. Dirty and urine-stained, he just lay there on the curb, right in the way of others who either would not or could not see him as a person in need. Beneath the jarring picture came a more jarring quote often attributed to Dorothy Day, “You really only love Jesus as much as the person you love the least.”

“You really only love Jesus as much as the person you love the least.”

A drunk like the one on the poster or a boy like Kevin were not the hardest people for me to love. I got them on some level. I could understand, a bit from my own experience, how or why someone could find themselves in the spot they were in.

As I began my search for Kevin that evening, I happened to meet up with one of the kind of people I do find most challenging to love. It was 8:00 pm, just as I started wandering around the city. Into the cold, rainy, and now-dark night, two well-dressed businessmen bustled out of a bar, finally on their way home from work. They were laughing and talking together, wrapping their coats tightly around themselves as protection from the chilly breeze. They clutched their brief cases even tighter, guarding them from cold-hearted thieves. As I followed them for several blocks, I saw the pair came across a homeless man holding a sign asking for help. They slowed and approached him—I thought they would drop a bit of change in his box. Instead, one of them said, “Get off my block you piece of stuff!” But “stuff” was not the word he used.

I don’t remember now what I yelled at the two men. It wasn’t kind. One of them turned and told me to go somewhere—warmer than Portland, as I recall. I am sure neither really heard me nor cared what I had to say. I can’t imagine my clever comment changed their hearts or altered their actions in the future. In many ways, I was no better than they were at dealing with others who are challenging to love. In that moment, I was reminded I still had very far to go in learning to love Christ.

Around 2:30 am, I found Kevin. I saw him come out of a bar a block away. As I approached, he looked more and more puzzled. When we were finally standing nose to nose, he said, “Are you looking for me and how did you find me?” I told him his mother sent me and God had led me to him. “She loves you and wants you to come home.”

At that moment, something struck a chord in his heart and this angry young man became a child again. In the early morning hours we drove home and had breakfast with his mother. Together once more, they embraced each other and the challenging work of being family.

This experience came to me recently as I was reading the book of Hosea and reflecting on our cultural crisis and the way people are expressing their angst and anger toward each other. In a recent research study on social media, the author discovered that rage is currently the ruling online emotion expressed through tweets and posts. We are an angry people—venting and spewing our frustrations with anyone and everyone we can.

I see this reality showing up in my little circle of Facebook friends—people I otherwise know as reasonable and likable. Some say they will no longer be “friends” with those who voted for that candidate. Others unfriend anyone who will not subscribe to their perspective on one of today’s controversial issues. They are done—no longer willing to engage those who are too difficult to love. Others write about being moved to become more outspoken, more in-your-face, more prophetic, in light of new political realities. I get this impulse—even though I think Christians are always supposed to be a prophetic people. What concerns me in this surge of urgent action is, what drives this impulse? The Holy Spirit and a sense of call—or more rage and anxiety?

The book of Hosea offers a glorious and gruesome account of the world we inhabit and how God engages us along the way. Like so many Old Testament stories it is challenging to read, describing in vivid detail a deeply broken world. It is ripe with images of pain and injustice. Suffering confronts us in ways not easily explained. The narrative is messy—often failing to live up to our expectations of what life could and should be like. It is a world beyond our easy manipulation and control—and sometimes, we fear, beyond God’s.

The story begins with God’s stark command to the prophet Hosea to go and marry a whore and love her—really love her. Have children together. Be a family. In this way, Hosea’s life will serve as a parable explaining God’s relationship with Israel.

Over several early chapters Hosea’s wife, Gomer, spurns him for other lovers. It is painful to read—the pain it brings to her, to him, the impact upon their children, and the reminder of ways that women are systematically abused within cultures of violence and exploitation. And the pain runs deeper, because underlying this one family’s trauma is the reminder of a cosmic drama where humans just like you and me consistently play the role of Gomer when it comes to fidelity toward the God who loves us. Looking past the hard-to-love character of Gomer, many of us wind up seeing ourselves, if we are willing.

In the story, we also see Hosea and God’s relentless devotion. Patience and understanding are shown in the face of betrayal. Tough-but-real love gets expressed even when thoroughly rejected. Love that will not let go holds on in the fragile hope that adulteress Gomer, faithless Israel—you and I—might come home.

Unwilling to give up, Hosea redeems Gomer from a life of shame and exploitation. He accepts the challenge of loving her back into the family. He acts in ways that restore her dignity. Hosea will not let go of her—not because he could not—but because he would not. In whatever limited and imperfect ways human behavior ever begins to reflect divine behavior—here is a start.

Late in the book, the imagery shifts from husband/wife to parent/child, and reveals some of the anger and angst stirring in God. In the whirl of political chaos, personal anguish, and spiritual depravity, God gets angry. Angry. This is a reality many people find uncomfortable. We prefer a placid, domesticated God—one who happily puts up with all of our stuff without batting an eye. If God really loves us, shouldn’t he accept us just as we are?!?

But in Hosea’s experience, fierce anger arises from frustrated and flummoxed love. It is the exasperation and heartache of a devoted mother being blown off by the surly, hormonal teenager. It is the flaring frustration of an anxious father, worried sick by a child out of control.

Just when the last reserves of love seem nearly drained away, and fury is about to breach the heart of God, there is a pause in the narrative. We can’t know how long or short it lasts, but it shows up right between verses 7 and 8 of Hosea 11. In that quiet moment, God’s heart recoils. In the Hebrew, it is described as something like an earthquake that takes place inwardly rather than outwardly. Changed, God says:

“How can I give you up, Ephraim? How can I hand you over, Israel?

My heart is changed within me; all my compassion is aroused.

I will not carry out my fierce anger, nor will I devastate Ephraim again.

For I am God, and not a man—the Holy One among you.”

On the verge of erupting in anger when his love is rejected, God stills himself—and bears the wound of love in his heart. Despite the pain and justifiable anger, loving compassion and mercy are shown to a people who are immensely hard to love. “And so I am not going to act on my anger…And why? Because I am God and not a human.”

Rather than expressing angry retribution outwardly, the suffering love of God is held inwardly. Instead of venting, unfriending, cutting others down, and cutting others off, God extends mercy, shows compassion, stays engaged. Without pretending there is no problem or excusing the adulteress ways of Gomers like me, God reveals compassion as a greater means to transformation and restoration than outrage can ever be.

When it comes to being a prophetic people, who so urgently and desperately want to work for change in the world, I am mindful of what a wise civil rights leader told me several years ago: “You can’t be a prophet among people you do not love.” Today, in our time, I would add—especially among those we love the least.

I don’t know a simple formula for turning rage and anger into compassion and mercy. Maybe it begins by remembering the relentless patience that God has shown to Gomers like us. Maybe it is nurtured in the knowledge that we are not God. And maybe it comes through a sturdy, resilient hope in a love that does not withdraw because of heartache, but continues to move, pursue, and transform others despite heartache. Even—and maybe even especially—those we love the least.