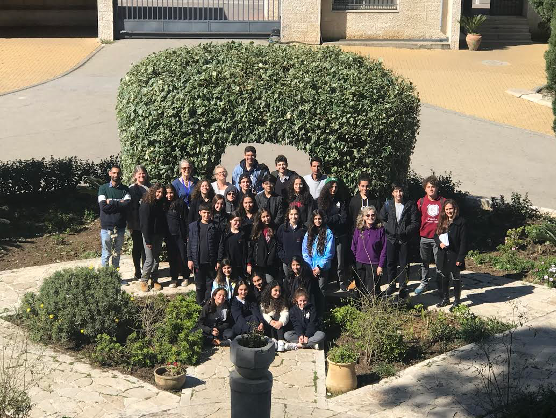 Christel Jorgenson, of Friends Meeting at Cambridge, New England Yearly Meeting, has been a Living Letters volunteer at Ramallah Friends School this winter, January through March. Christel met headmaster Adrian Moody and his wife Gill Hoskin at NEYM Sessions in August. She was impressed with their commitment and enthusiasm. The needs of the school seemed to line up with Christel's interests and aptitudes. Being a landscape gardener, Christel lit up when Gill described their landscaping projects that needed some animation. She hoped that her present and past work in religious education and youth work could help the school and the local meeting. Posted below is an excerpt from the most recent report that she sent back to her Meeting.

In the picture at right you see Hadi Janem and his parents. You're looking at the reason that I'm here at Ramallah Friends School (RFS) right now. Not really just them, but that here they are at the Upper School campus, accompanying a wedding party that is having their pictures taken. Off-camera are young women in long beaded dresses and amazing makeup waiting with the photographer for the bride, an RFS graduate, to arrive. I recognized Hadi, the bride’s cousin, because he is in one of the student groups that worked on the re-design of The Circle, a landmark space of the RFS campus. In a few years, Hadi will have his photo taken at The Circle, as have so many other RFS graduates in the past.

In the picture above you see a map of the Upper Campus. Our project has been the re-design of The Circle, which is the green edged circle with the crisscrossing pathways.

I have never designed with a committee, let alone with three of them. Students were chosen from middle school and high school to work on this project. After giving initial feedback on what they wanted to see in the Circle, how they might use it, why they felt it was important, two groups each developed a plan. The adults, namely the Tree Committee, also developed a plan. We had meetings to present our plans to each other. The students did computer generated drawings. I had colored pencils and pens and tracing paper. Ah, the generation gap! For the final plan, Amal in the facilities office made an autocad drawing—a bit of "being on the same page."

How can I express how touching it was to hear the students expressing their ideas and their ideals.  These students are so thoughtful and articulate, even in their second language, English.

"Why do I think the Circle is important? When we students enter the campus, the Circle is the first thing that we see and it's green and it always makes me feel safe and optimistic, like I've shut out the outside world and I'm going to have a good day."

"When my brother graduated from RFS, he had his picture taken at The Arch. I want my picture there, too. We all do."

"We know that it's a little out of place to have a tree growing in the sidewalk, but I think it has a right to be there. It's imperfect, but maybe it's like we as students are imperfect, but we belong here, too." (This was Hadi.)

My synopsis of the two student presentations:

"Our group plan is called "Untamed Palestine!"  We want to make a place where our heritage will be on display, where you might find plants from my grandmother's garden. We want all native plants* and symmetry, but not too much. And don't change The Arch! and no trees get removed.” **

"Our group plan sees the need for more color. We would replace all the hedge with this yellow plant and we'd add these colorful flowers. And don't change The Arch! and no trees get removed.” **

"The Arch" is a predominant feature of The Circle, the first thing you see when you come in the main gate. It is both an overgrown cluster of non-native invasive vine and also, because of its age, a symbol of connection with the school and school history.  Aren't traditions fascinating? We could agree on its design positives. The hedera (ivy) stays green all year, thus a backdrop for all-seasons photos. The leaves are nice and variegated and it's hard to kill.  We settled on retaining it, with the possibility of a very strong trim and adding some plants alongside to blend it more into the rest of the landscape. The photo at the top of this page, in front of The Arch, is of the adults and students (not all of them) who worked on the design, on the sunny day that we had for the final presentation.  We were all joyful about this design that we are going to see come to life.

The plan calls for six Judas trees (red buds) and four almond trees. The purchase of these trees will get a boost from a tree fund donation from Friends at Friends Meeting at Cambridge. I was so delighted to tell the students about this loving connection with my Friends Meeting.

Later, on the day of the final presentations, Wednesday March 4, I took the picture of Hadi and his parents. Adrian, Gill, Saleh, and I planned a trip to Jerusalem on Sunday to buy Judas trees.

On Friday, I had the usual weekend breakfast with Naser, Gill, and Adrian at the gatehouse.  Naser has the first shift in the gatehouse on Friday and always stops by Samers restaurant on his way for falafel, pita, hummus, vegetables, pickles, and hot peppers. And, of course, the extra olive oil that he puts on the hummus. Gill and Adrian bring the coffee. No silverware required, we mop with the pita bread. [image.jpg]

The news that particular morning was that the government was closing all schools in Ramallah for a month. Starting immediately. I hadn't seen this coming.

Greek tourists who'd been in Bethlehem had gone home and tested positive for the coronavirus, so testing began at the hotel where they stayed and Bethlehem has cases. Quickly, a state of emergency was declared and schools closed, to slow the spread of the virus.

It's taken me a while to really absorb this news. My first response was to go out and buy food! Then to imagine what I would do until my return trip ticket. I'd gotten a ninety day visa, which would expire on April 2, and that was my return date.

With no employees allowed on campus for a month, no one will be there to do the heavy landscaping work until at least April, after I leave. I won't be able to participate in the installation of the Circle. My disappointment is pretty intense—so much design happens when you actually install. Besides the landscaping, the connections I have been developing with people here are not going to have this last month to deepen.

Adrian reminds me that we are in a West Bank kind of situation. People here have to accept that their plans could likely be disrupted, a trip they'd planned suddenly forbidden, their livelihood called into question because of some decree, that pretty important aspects of life are out of their control. The difference in this case is that it isn't the Israelis and the occupation, but rather a health crisis. This level of uncertainty is a new feeling for me and I'm trying to cope with it. I know that, compared with the difficulties of others, this is like having the sniffles compared to pneumonia. It can't be called a big problem.

Mostly it's uncertainty. There is the possibility that Ramallah will get quarantined. That the trip to the airport in Tel Aviv becomes impossible, that the West Bank gets sealed off. That flights are cancelled. Nobody knows.

But we're already talking about when I can come back.

*As it turns out, "native plants" is a tricky term to use in a place that has been on trade routes for thousands of years. Native from which millenium?

**A word about reactions to tree removal:  Trees have a status as bearers of history and a sign of continuity and stability in a place and for a culture that feels under threat. Israeli settlers use chopping down olive trees as a tactic of intimidation against Palestinians. Last year over 150 trees were planted on the RFS campus, to celebrate the 150 years of the school and to show a confidence in the future and for the health of the planet.

Postscript:  This report was written on March 8.  On the evening of March 10 I returned to the US, taking one of the few flights remaining from Tel Aviv.