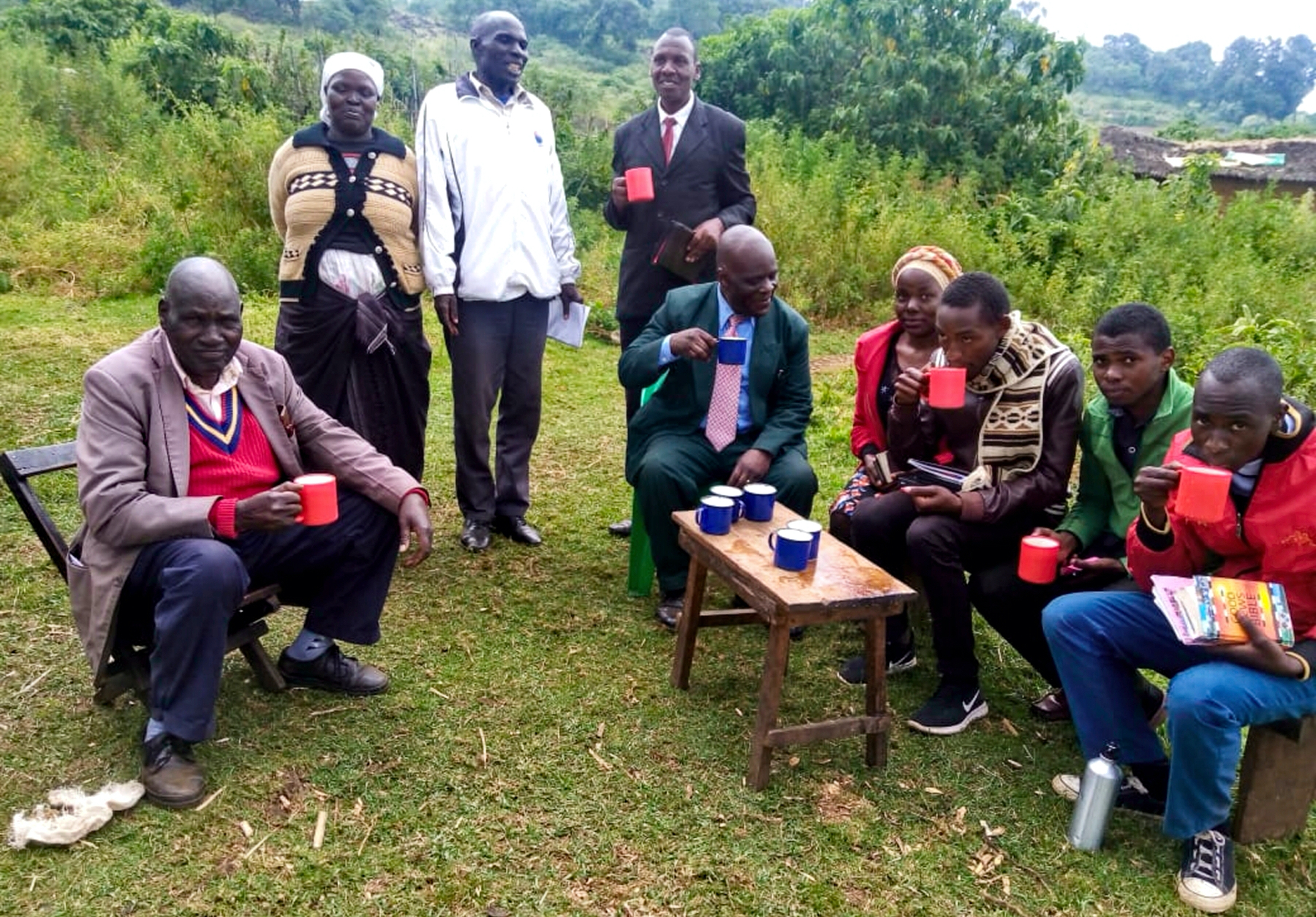 Thursday the 6th of August 2020 was a normal day like any other. As a Friends missionary serving on Mt. Elgon, I was to do home visitation in Kaboywo Monthly Meeting as per my diary. The Friends Mission on Mt. Elgon has three Monthly Meetings under Kaptama Quarterly Meeting, namely Kaptama, Kaboywo, and Kimobo. There are eleven Village Meetings.

On my way to Kaboywo I met Pastor Charles Masai, who is our Friends Church pastor. We went together to Evangelist Stanley Kwalia’s house. I had assigned Stanley to serve one of the local churches deep in the forest known as Toboo. We found Stanley very sick, lying on the mattress outside his house. He could only respond to greetings in a very low tone.

Stanley had been sick for over two months. The family had taken him to a traditional healer across the border in nearby Uganda, but his condition had not improved. He was not eating, neither could he pass stool; the stomach was swollen and his health had worsened.

We prayed for Stanley, but there was an inner voice in my heart telling me that unless Stanley reaches the hospital, he will not be with us in the next few days. After praying, we left Stanley and went back to our homes. I did not sleep well that night, as I felt disturbed by Stanley’s health condition. My concern was, if Stanley would die in his house, as a church what are we going to tell people in terms of trying to save his life?

On Friday the 7th of August, in the morning, the first thing I did was to call FUM Africa Ministries Director John Muhanji. I explained to him the situation on the ground and requested for his advice as well as his assistance. I thank God that Brother John asked me to take Stanley to Friends Lugulu Mission Hospital (FLMH) as fast as I could, and he directed me to see the hospital administrator when I arrived.

Getting to the hospital was another challenge: from Stanley’s home to the hospital is about thirty km. We have no means of transport for the Mission, so I called the area government official Honorable Chemion and requested him to assist us with a vehicle. He agreed and sent the driver to pick me, and we went together up to Stanley’s home. I had called the family earlier and asked them to prepare the patient that I was going to pick him so that we could go to the hospital.

When I arrived at Stanley’s home, I found the family members having a meeting in the house. When I entered the house there was total silence; each person was staring at one another. I gathered my courage and requested we pray. After the prayer I was shown where to sit. The wife told me, “Missionary, before you move on we have something to share with you, and Stanley’s brother Samuel will speak on our behalf.”

Samuel cleared his throat and said, “Missionary, you know Stanley’s problem, we know it, it’s man-made and he has been with it for a long time. He has a traditional doctor who attends to him, and in fact he has just been here. So we don’t think hospital medication will be of any help.” I was quiet for a minute, then I replied, “It’s ok, but since it has taken a very long time and there has been no improvement in Stanley’s health, I request that we try hospital medication. If at all it doesn’t work, then you will have to continue with your traditional medicine.” Charles, one of Stanley’s brothers, and Stanley’s elder son Kitoo, supported my idea. Some other people in the house also supported the hospital way.

While the discussion was going on in the sitting room, Stanley called his wife and son to come to the room where he was laying. He told the wife and the son: “If the missionary has come to take me to the hospital, that’s the voice of God speaking, let me go to the hospital.” When the son delivered this message to those in the sitting room, there was no further comment from anyone.

Stanley was helped to dress, I prayed, and we left for Lugulu. On arriving at the gate of the mission hospital, I met the administrator and introduced myself to him and why I was there. The administrator looked for the wheelchair and Stanley was taken straight to the doctor’s room. After being examined he was wheeled to the male ward for admission. The nurse in the ward, when he saw the patient entering the ward on a wheelchair, shouted to the colleague, “Huyo peleka ward ya maternity!” which means, “Take that one to the maternity ward!” Because of Stanley’s swollen stomach, the nurse thought he was an expectant mother! There was laughter from other patients in the ward.

Dr. Mohammed started attending to Stanley and he was referred for a CT scan at Kakamega town. The hospital ambulance and the nurse accompanied the patient to Kakamega and the CT scan was done. The results showed he had a “large bowel obstruction with transition at sigmoid region.” The doctor therefore recommended an operation.

When I informed the family, again there was opposition, but Stanley himself was confident he was in good hands and his God was with him. He called me, “Missionary, this is my life and I want to be well. I'm therefore going to sign so that I can go to the operating theater; if through you, FUM has agreed to assist me, I cannot let that opportunity go.”

Stanley was operated on and it was successful; after a few days he was able to take light meals and porridge. His face brightened up and you could see hope in him. All this time, no family member visited him in the hospital apart from his son who was taking care of him. The clean environment of the wards, loving and caring medical staff, and clean beddings contributed to Stanley’s health improving tremendously.

Stanley is full of praise to the Friends Church; he recalls he was ferried in an ambulance labeled “Donated by Friends Church to FLMH.” He was wheeled on a wheelchair with a label, “Donated to FLMH.” Stanley looked directly into my eyes from his hospital bed and remarked, “Missionary, you have taught us several times the need to give ourselves to the Lord as well as to give our resources no matter how small. But we have never understood. I think God brought me here with a purpose, to show me what other servants of God are doing. If it were not for the church and the Lugulu Mission Hospital staff I would be no more by today.”

Stanley was discharged from the hospital after staying in for seventeen days. The total bill was KSh. 88,070 (about $880 US dollars), which was taken care of by FUM’s Adopt-A-Bed program. Stanley is currently at home and he is recovering well. Let’s continue praying for his quick healing. Personally, I also thank God for Stanley’s life. The case had become like a thorn in my body, especially when the family was not for the idea of going to the hospital. I was worried—if something bad happened, then I will be held responsible. I was referred to as “Mwewe”—this is a bird that usually eats hen’s chicks. “Missionary came here, picked Stanley like mwewe, we don’t know where he took him.” I was very happy when I returned Stanley alive to the very house where I took him when going to the hospital.

I want to send my appreciation to John Muhanji and all the medical staff at FLMH, led by Dr. Mohammed, including Catherine, Thomas, and Moses, to name but a few.