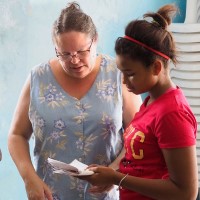 Eden Grace has served as Friends United Meeting’s Global Ministries Director since July 2013. From 2004 through mid-2013, Eden served as the Field Officer for FUM in the Africa Ministries Office in Kisumu, Kenya. Eden is responsible for shepherding FUM’s programmatic work in 11 countries on 4 continents. She has a passion for the holistic and transformational witness of Friends that arises from deep worship in the gathered body. She’s particularly engaged in issues of race,class, gender, culture and colonialism within the beloved fellowship of believers. She thinks of her role specifically, and that of FUM in general, as a ligament in the body of Christ (Ephesians 4:15-16 and Colossians 2:19).

Eden holds a Masters of Divinity degree from Episcopal Divinity School in Cambridge, Massachusetts and a Certificate in International Mission and Ecumenism from the Boston Theological Institute. Her undergraduate degree is from Brown University in Providence Rhode Island, where she studied drama literature and semiotics. In addition to Eden’s extensive involvement with Friends’ organizations, she has also served in leadership roles in the World Council of Churches and the Massachusetts Council of Churches, and carries a deep concern for Christian unity. As a missiologist, she focuses her work on liberating the Christian witness from the power distortions of historic missionary movements, in favor of a gospel that is truly “good news” for all of God’s creation.

Eden Grace is a member of Beacon Hill Friends Meeting (Boston MA USA) in New England Yearly Meeting, and is an active attender of West Richmond Friends Meeting(Richmond IN USA). She and her husband Jim are currently parenting their own two young adult sons, a host-daughter from Kenya, and a young adult from Richmond. Eden loves to pray, parent, travel, sing sacred choral music, read fiction and make quilts using African fabrics.