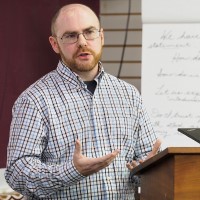 Ben received degrees in German Education and Spanish Education from Ball State University. He taught German and Spanish language, literature, and culture in public high school settings for over a decade. He is a life-long Friend and is a member of Bear Creek Friends Church and Indiana Yearly Meeting. He has served as a hospital chaplain, a preacher for pulpit supply, a member of various IYM committees, and as a minister for several different churches. He currently serves as the pastor of West River Friends Church near Hagerstown, Indiana.

Ben met his wife, Melissa, while she was studying in the US as an international student from the Cayman Islands, BWI. They have been married for over ten years and have a daughter, Elizabeth. When the Snyders are not visiting family in West Bay, Grand Cayman, they reside in Farmland, Indiana.